The Bonnet Carré Spillway is flowing two years in a row, a first in its entire history. Let's take a look at how bad it's going to be for inshore anglers in its path.

How Bonnet Carré Will Affect Inshore Fishing For 2019

By now the Army Corps of Engineers has opened the flood control structure that we inshore anglers aren't particularly fond of. You can't blame us, river water is a surefire way to shut down any trout action we've been hoping for this spring.

Not that we didn't have a good winter, but we do look forward to that awesome spring-time bite for speckled trout on the bridges of Lake Pontchartrain. A hot bite at the Trestles is an excellent fishing experience!

Quick Recap On River Water (and why it's bad)

Maybe you're a newcomer to inshore fishing and wonder why this spillway opening is making us groan in pain.

In short, river water is bad for inshore species, not because it dilutes saltwater (redfish do fine in freshwater and speckled trout thrive in extreme low salinity) but because the dirty water is tough on fish not adapted to it.

The suspended silt irritates their large eyes and thin gill plates, ultimately causing them to leave the area. What this sandstorm is to people, muddy river water is to speckled trout and redfish.

Plus, redfish (adults over 27") and speckled trout cannot spawn in water that's so fresh.

So river water will push them away to saltier destinations during their spawn, not unlike what happened with this big trout.

This Time It's Worse

River water flooding from the spillway into Lake Pontchartrain is nothing new, it's happened a dozen times before.

What is new is the fact that this opening is the first one to happen two years in a row. Last year's spillway opening in action, as seen from the sky.

That same year we had historical 500 and 1,000 year floods from the Amite, Tchefuncte and Pearl Rivers, so it's safe to say that Lake Pontchartrain has seen as much river water as she ever has since the MRGO was dug. But Its Gets Worse

There's a monumental amount of water coming down the pipe.

Dams in the Tennessee river are spilling over and emergencies have been declared in both Kentucky and Mississippi. My uncle in Tennessee sent me this screenshot of two 500 gallon drums swept away near the Tennessee River. All that water is headed here.

And It Will Grow Worse Yet

North of us (like...way past the Mason-Dixon line) freezing temperatures still linger, leaving snow on the ground. 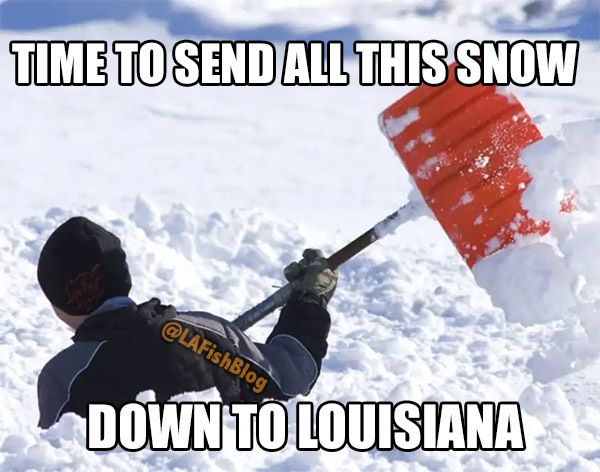 Snow that will eventually melt into water...

...water that will eventually flow our way...

...and out the Bonnet Carré Spillway.

(did not intend for that to rhyme)

The only constant is change, and nothing has ever stayed the same but that very thing, especially when it comes to Louisiana's wetlands.

If this river water proves anything, it's exactly that.

Furthermore, we'll see which inshore anglers are able to handle that change, and that will be evidenced by who brings home the boxes of redfish and trout, and those who do not.

It's hard to beat good fishing advice, isn't it?

Run whatever boat you like, whatever "fish finder", whatever rod, and it will do you no good if you don't know how to practically apply it to achieve positive results: catching the fish you target.

NOTE: These things don't apply only to Bonnet Carré, but anywhere river water becomes an issue for inshore anglers.

So I'm sure you'll find this fishing advice useful.

This Artificial Live Bait Works Wonders for Specks and Reds