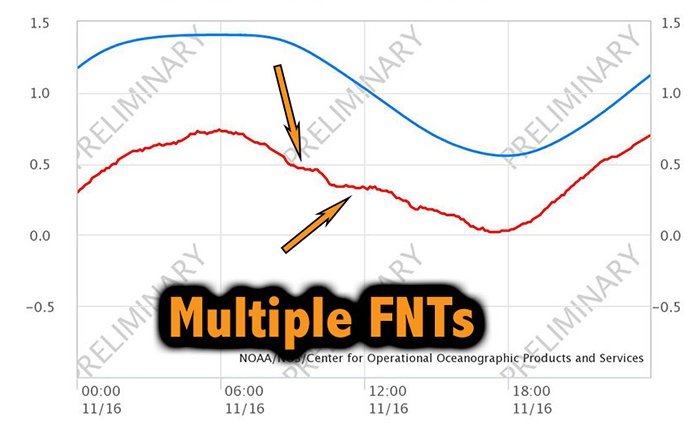 How To Predict False Neap Tides

A false neap tide will doom your fishing trip! Worse yet, tide apps cannot predict it, but this blog post will arm you with the knowledge you need to detect it and plan accordingly.

In yesterday's blog post I covered exactly what a "false" neap tide is.

This time I'm detailing how to predict it, since all weather and tide apps cannot.

The information in this article is the real deal and an advanced understanding of conditions that only the most accomplished anglers possess.

Keep reading to take your game to the next level!

These are the kind caused by strong winds canceling out a tide.

This is a sudden 20 knot south wind killing a 1.6 foot falling tide. Here's another case of east winds stalling a falling tide. Not making any sense?

Maybe you're not familiar with the National Data Buoy Center, their weather stations and how to access and read their data to monitor real-time conditions in the marsh.

Now For The Hard Stuff

The FNT's we just covered are easy to spot.

All you need to do is compare the forecasted wind against the predicted tide.

For more details on how to do this, you should really read Mastering The Tide.

But now it's time to jump into the FNT that got me last Friday and, in order to do that, I must tell you about Thursday's fishing trip.

These were the conditions we faced on Thursday, November 15th, 2018: As you can see, the water dropped like a rock.

The predicted falling tide combined with that strong northwest wind caused the water to drop 1.5 feet, way past the ~1 foot prediction.

In fact, the water was already fairly low, given the northwest wind had been blowing for a few days.

Needless to say, we had no problem catching our limit of 50 speckled trout. That's Day One in a nutshell. Day Two was a different animal.

The conditions were different this time, with the falling tide being slightly weaker and wind not blowing at all. That may not look like much to you, so here's water levels from the USGS Bay Gardene station. (The graphs above come from NDBC's Shell Beach Buoy).

Now compare this data against the predicted tide for that same station. We had launched out of Delacroix and expected to smash fish on the falling tide, but the tide never fell that morning.

It was confusing because at first the tide seemed to fall, then it seemed to come in, then went completely flat.

We ran farther south towards Pointe a la Hache to where I thought water would move first.

But crab traps along the way didn't indicate any water movement.

If they had, they'd be leaned over like in the photo below. Crab traps are great indicators of what the tide is doing. Watch them as you run through the marsh.

It became obvious what was going on, and I figured trying my luck in Hopedale would be worth a shot.

So we made the run, but it proved to be a horrible roll of the dice.

We missed the falling water that eventually happened on the Bay Gardene tide table and hopped onto another FNT at Hopedale.

By noon I called it quits, needing to go home and prep the boat for another trip.

Our catch: three speckled trout and a pompano (he was lost).

Water levels got a nasty "one-two punch" from the wind. The first punch came in the form of strong northwest winds.

They dropped water levels, which is fine, because so long as those winds keep blowing at a constant the marsh (and water levels) will adjust accordingly.

For the most part, the tide will still do its thing.

The wind didn't slowly let up and allow the marsh to adjust, it straight quit blowing.

This left only the tide to influence water levels, and on the morning of the 16th the "high tide" was already at its predicted low tide.

How could it possibly fall?

Yes, gravitational pull from the sun and moon still did its thing, but to a smaller degree that left inshore anglers scratching their heads.

Take a look, you'll see that the incoming tide was stronger than predicted and the falling tide weaker. Did anyone catch fish at all?

Of course! It's almost a law of fishing that somebody, somewhere will always catch a better box than you.

I know for a fact people caught limits of speckled trout on the 16th (and where).

Those fish were on a deep, still water pattern that doesn't require much of a tide.

In all fairness, it's the pattern I wanted to fish since I caught a limit on it the day before.

However, my buddies got a camp in Delacroix and wanted to fish a more conventional pattern that would've required the water to drop as predicted.

The most important aspect of a fishing trip is the planning phase, and part of that is looking at the predicted conditions so you know where to go and what to do.

Yes, there are apps for this, but they only provide predicted data and don't factor in every condition.

They don't have a snowball's chance in Hell to predict false neap tides.

So it's important you look at the big picture, and factor in all the conditions to make the best decision possible.

Your ability to do this will improve with time on water, but since you read this blog post your understanding of the marsh and how its influenced is years ahead of those missing this knowledge.