Daiwa’s Air Brake System: How It Works And Why You Want It

Carolina Rig Instructions For Speckled Trout, Redfish & Flounder
Palomar Knot: Complete Guide To Tying It Right The First Time
What Is The Best Popping Cork For Catching Speckled Trout And Redfish?
Best Tackle For The Redfish Jubilee
Daiwa Tatula SV Review – Good Reasons Why You Want One
How Does Three Percent Theory Impact Speckled Trout?
This Is Why Daiwa’s T-Wing System Will Help You Catch More Fish
Why I Love Daiwa (and why it’s the best kept secret in inshore fishing) 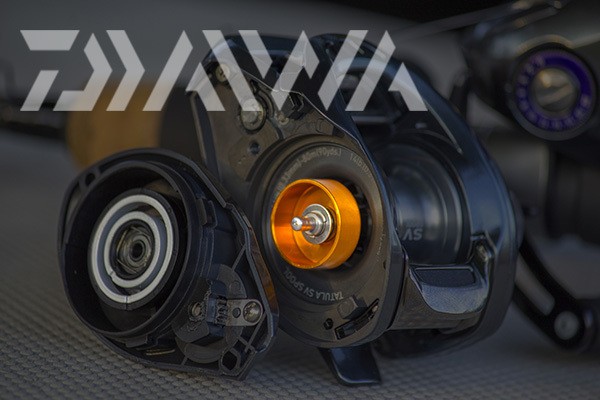 Daiwa’s Air Brake System: How It Works And Why You Want It

Daiwa's Air Brake System makes it virtually impossible to backlash a baitcaster. Whether you're new to casting tackle or a salty veteran, this is a feature you want in your reel.

It's true, those anglers using casting tackle enjoy an advantage over those who don't:

Q: So why doesn't everyone use a baitcaster?

A: Because they fear that show-stopping backlash. If they knew about Daiwa's Air Brake System they wouldn't worry about backlash in the first place.

What is Daiwa's Air Brake System?

It's a specialized magnetic braking system that improves casting performance from beginning to end.

In fact, it's based upon the proven MagForce Z (but with a few tweaks) and isn't offered by another other manufacturer.

But there's more to it than that, so let's jump into how this system works and how it benefits you.

What makes this brake system so great?

To answer this question you must first understand that there are two main types of casting brakes: centrifugal and magnetic.

In fact, I've detailed the differences between the two inside this article (inshore anglers use it to make good purchasing decisions) and always found that centrifugal brakes tend to perform the best. So, I couldn't help but squirm upon learning the Tatula series of reels have magnetic brakes, because all I could think of was picking out the backlash that haunts the "meh" performance of magnets.

Boy, was I wrong.

Yes, Tatula reels have magnetic brakes, but not the conventional, glued-in type we see in entry level reels. The idea behind brakes on a casting reel is to reduce RPMs in order to avoid the spool outpacing the bait during a cast, without reducing the casting distance.

Too little brake and you backlash, but too much brake and casting distance is reduced.

So you want to have a brake system that will slow down the spool when it's moving too fast, but let it continue to spin to pay out as much line as possible...

...as smoothly as possible.

Centrifugal brakes achieve this by applying more braking power in the beginning of the cast and less towards the end.

Conventional magnetic brakes really don't, instead applying the same magnetic force to the spool throughout the entire cast, so they're really not "smart" compared to their centrifugal cousins.

The Air Brake System is not so dull and boring because it's engineered using a design not seen in other reels. This is Daiwa's Air Brake System, and it consists of a spring loaded inductor cup and two adjustable magnetic rings.

Let me explain, as simply as possible, how Daiwa's Air Brake System works, from beginning to end.

At the very beginning of a cast there is no braking power applied to the spool at all.

This allows the spool to spin lightning fast in the split second your thumb comes off the spool and the lure begins flying towards its destination. 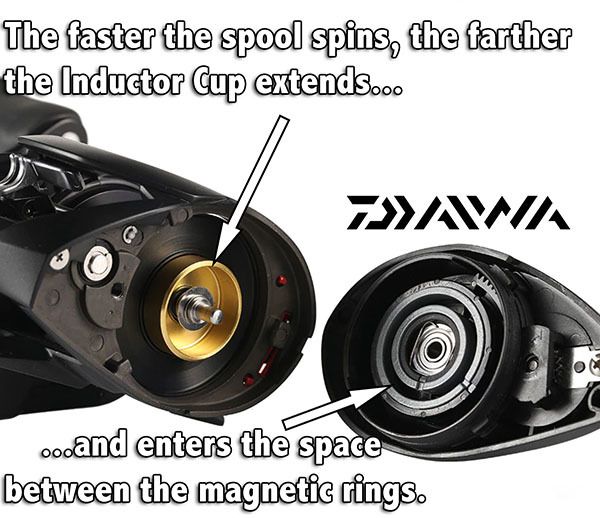 Then the centrifugal force of the spool overcomes the spring holding the cup back, causing it to enter the magnetic field of the two rings, ultimately applying braking power where it's needed at max RPM.

As spool RPMs decrease, the spring gradually pushes the inductor cup out of the magnetic rings, evenly reducing braking power.

Finally, the RPMs become low enough that the cup is completely retracted and no braking power is applied at all, allowing the spool to spin freely at the final part of the cast, getting you that last bit of performance.

Below is a slow motion video showing how the inductor cup extends outward into the magnetic rings (not pictured).

NOTE: Please forgive the uneven RPM and slight wobbling, the Dremel tool used was on its last legs and died after recording. Such is life.

Let's not overlook the fact that Daiwa's Air Brake System does not use friction to operate, unlike centrifugal brakes.

See, if any moisture (or bearing oil) were to seep into the race of a centrifugal brake, its braking power would be drastically reduced and without warning.

The consequence? Instant backlash and a screeching reel you have to take apart to service.

There are many good casting reels to choose from, and it's my advice you find one that fits your needs at the best price point possible.

But, if you're looking for a reel that will cast like a dream and help you cover more water (think 3% Theory), you really need to look at reels fitted with Daiwa's Air Brake System, and especially their T-Wing System.

Have questions or something to add? Post 'em up below, or ask other anglers for their opinion at LAFB Inshore.