Three Reasons You Will Love Shallow Crankbaits to Catch Redfish

Crankbaits are a staple for bass fishing, but have proven their worth catching redfish in Louisiana's marsh. These are reasons you should tie one on.

Anglers pride themselves on being successful with lures no one else uses, probably because it's a way to stand out from the crowd, but also a way to catch fish when conventional tackle fails.

One such lure is a shallow diving crankbait. In fact, during a fishing trip review, tying on a red squarebill is what worked when I observed redfish turning down a Flashy Swimmer and swimmin' craw.

They just preferred that kind of action!

This is an action redfish rarely see.

They’re used to popping corks, gold spoons and spinnerbaits, but something wig-wagging and bumping into cover is new to most, making them more likely to take notice.

A shallow-diving crankbait will float to the surface when you stop retrieving, making it easier to get unsnagged from tree limbs (“wood in the winter”) or create a different presentation altogether.

Reeling slower causes the crankbait to run shallower and, if you run shallow enough, you’ll create a “waking” effect that grabs the attention of nearby redfish, or a big bass. Whether in the marsh, a lake, or a humble pond, largemouth bass love the action of a shallow crankbait.

Bass are another reason to keep a shallow crank or two around, especially given their comeback with the "freshening" we've seen on Louisiana's coast.

The compact, streamlined shape makes these baits easy to cast a far distance.

Rigs like a popping cork catch a lot of air and are tough to cast far and accurately.

Even spinnerbaits slow down from the drag their blades and skirts create during a cast.

But a little crankbait zings through the air like a rock.

With some being as heavy as a half ounce, you have plenty of weight to load up the rod on each cast.

What rod/reel combo should you use?

As always, when selecting a rod or choosing a casting reel, you must look at the needs to be met:

For these reasons you should consider a rod and reel with these specs:

My favorite rod and reel combination that matches this perfectly is Daiwa's Tatula Glass Cranking Rod (TTU721MHRB-G) and a Tatula 150 or Tatula 100.

I've used a Tatula SV before and it does fine (though its shallow spool is better suited for throwing light baits).

What about fishing line?

I do not use braid because it casts like crap and has no stretch.

It’s good to have some stretch with those treble hooks and when the bill deflects off cover like dock pilings and oysters.

Plus monofilament isn’t as flimsy as braid, not getting tangled on treble hooks, and casts much smoother, especially with a silicon lubricant added.

What are some good shallow crankbaits to try?

I've fished with a few over the years, and suggest you give these a try:

I really like the H2O Express baits because they're much cheaper, swim just as well as any brand squarebill or wakebait, and come armed with VMC treble hooks that hold up against redfish. 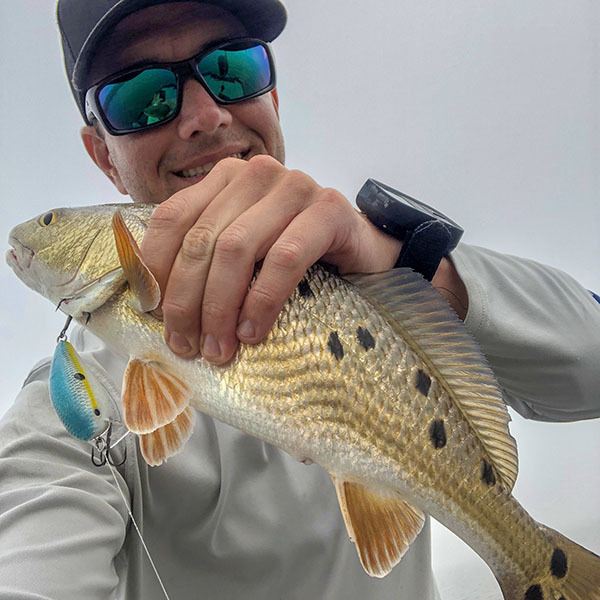 This eating-sized redfish couldn't resist the waking action of a shallow crankbait.

Do you have a favorite bait you enjoy? Share it in the comments below!

Steel or Aluminum Prop? What I Use and Why