What is the best salinity for speckled trout? The truth isn't what Louisiana's inshore anglers normally think.

When we look for speckled trout we think of saltwater, probably why some refer to it as "saltwater" fishing.

But that's a misnomer, as it's really inshore fishing, the "inbetween" of freshwater and offshore fishing.

However, this doesn't change the fact that, when targeting speckled trout, we think of the Big Three, and part of that equation is the presence of salty water.

I've always assumed – not incorrectly, but not accurately, either – that a body of water must have a high salt content to yield speckled trout, though I never really got around to measuring exactly how much salt is present in the bodies of water they were caught in.

At best, we'd taste the water (at the surface, where it's the least salty) and give it a thumbs up or thumbs down.

But consider that, back in the day, before the MRGO Rock Dam, before the historically high rivers, salty water was so easy to come by that we just took it for granted.

But that's no longer the case and in the last 10 years our fishery has changed dramatically.

It's freshened a lot, and old honey holes now have more bass than speckled trout!

Yet we still see specks pushing deep inside the marsh during the fall and winter.

And, if you take a minute to look, you'd be surprised how unsalty these areas are.

These Special Maps Shed Some Light

There's a group of special maps you may find useful for revealing the best salinity for speckled trout, and those are the Hydrocoast Maps for southeast Louisiana.

We're interested in the salinity map. In fact, here's one for January 2019: NOTE: This is just a thumbnail, click to see the entire PDF.

Download the PDF (by clicking the above picture) and take a minute to familiarize yourself with the legend.

Okay, up to speed?

Now look closely at the area around The Wall in Chalmette and note the ridiculously low salinity, one conventional knowledge does not acknowledge as being the best salinity for speckled trout. How low? Three parts per thousand.

To put that into perspective, specks need at least 17ppt to spawn and full strength saltwater is 35ppt.

That's right, the majority of the marsh we fish is barely a quarter salty as ocean water, and The Wall is where I caught limits of specks all winter long. 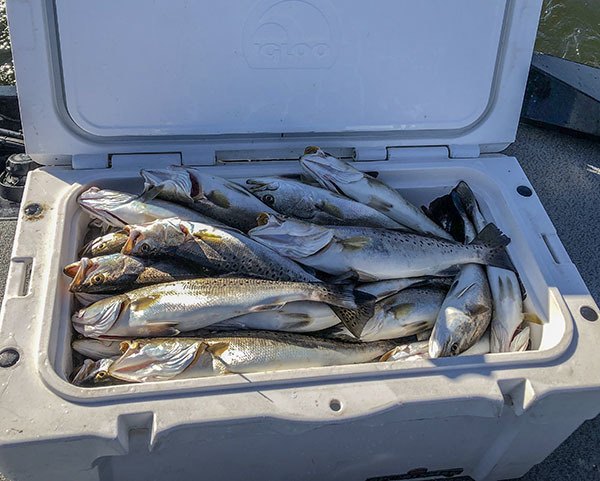 Here's a Hydrocoast map for November 2016, when we saw some of the best speck fishing in Lake Pontchartrain in years. Now, these maps are just models, and not exact measurements in every location, but I doubt they're off by a huge margin, like ~10ppt.

It's my humble opinion that, outside of their spawn, salinity is not a driving factor for speckled trout. For a seasoned angler, this is no surprise, because he knows fish just want to be comfortable and have something to eat.

If this means changing their behavior, then that's what they will do, regardless of what we think the best salinity for speckled trout is.

Consider bass lakes where blueback herring are the primary forage: they stop acting like bass and roam the lake after schools of bluebacks, as if they were stripers.

Would the location and behavior of bait not equally affect the behavior of speckled trout?

I think specks aren't focused on salinity, but where there is shelter from bad weather, and nearby food to eat.

Take a hard look at the MRGO near Chalmette, and it's obvious it has everything wintering trout could possibly want:

I haven't seen nearly as many big schools of juvenile pogies anywhere else I've fished, and have had the most success this winter in the MRGO.

This spot is very much like the MRGO, and not far away. These low saline areas with deeper water are the only places I'm locating the most pogies during winter.

The only time of the year speckled trout rely heavily upon salinity is when they are actively spawning.

As said before, the best salinity for speckled trout during their spawn is, at a minimum, seventeen parts per thousand.

I feel as long as there is some amount of salt (2-4ppt qualifies) we can catch specks provided their other needs are met in that location.

Obviously things like river water would put a hamper on that in a hurry, but this doesn't change the fact that speckled trout are an estuarine species.

And they're an estuarine species with needs that could outweigh environmental factors.

Like any animal, they will make the necessary adjustments in order to thrive.

The question is, will you make adjustments to how you fish?

I have, and you can see exactly how in these fishing trip reviews:

Full access is only available to members of LAFB Elite, but there are free previews available.

My favorite part is the planning video, so you can see how I figure out where to find and catch these fish.